Hashkivenu- Awaken Us To Life 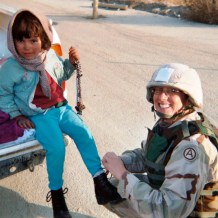 “It’s almost like being home.”  This was the response of a young Soldier at Forward Operating Base Taji, Iraq, following the Passover seder in 2005.  As I traveled throughout the country, seder participants were amazed and touched that a rabbi would reach out to them in their remote locations to create a small island of familiar and comforting ritual.  Privates sitting next to Captains, it didn’t matter.  Singing Dayenu together transcended the usual barriers of rank and assignment.

2005 was a rough year in Iraq.  A small contingent of Jewish Soldiers serving at Abu Ghraib prison surrounded me in a diamond formation, offering protection as we walked their camp.  I journeyed to Forward Operating Base Sykes, where the seder was held inside the secure area of the Tactical Operations Center.  As we began, one Sergeant remarked that he was glad we were behind closed doors for our own protection.  It was quite a tense moment when we opened the door for Elijah, but a triumphant moment as we asserted our right as Americans to freedom of religious expression.

I had the privilege of providing Jewish religious support for Passover in Iraq in 2005 and 2006.  The largest gathering was 41 folks, the smallest was me and 2 others.  Every encounter underlining the escape from tyranny was exponentially meaningful in those heady days of the overthrow of Saddam Hussein.

As a military chaplain, most of our duties have little to do with the Jewish community.  Chaplains serve all the members of our units, Family members, and DA civilians.  Being the first chaplain to establish a US Army Reserve Regional Support Command was a challenging growth experience, establishing standard operating procedures, and supervising a growing staff serving 7 southwestern states.  We administered the Army’s Strong Bonds program, developing and implementing retreats for single Soldiers, Couples, and Families.

The Army has provided leadership training and opportunities I could never have experienced in the civilian world.  In 2011 I was selected to attend the US Army War College, and in 2013 I received a Master of Strategic Studies degree following the most demanding academic experience of my life.  Serving in the reserve component has allowed me to maintain my focus on my beloved congregation, while simultaneously creating a window into the unique environment of the United States Army.

An assignment to US Army Europe allowed me to travel in France and Germany, and craft a training conference for Jewish lay leaders.  With the 164th Corps Support Group I spent 3 weeks in South Korea, where I attended a Purim Ball at the Seoul Hilton.  After the attack on the World Trade Center, I was mobilized for a year of service as the 112th Military Intelligence Brigade Chaplain.  Now, as the Command Chaplain of the 807th Medical Command, I mentor and provide training for 140 Chaplains, Chaplain Assistants, and Chaplain Candidates, serving 11,700 Soldiers in 26 states.

Yet- it is the moments with deployed Jewish service members that make my heart sing.  I have been to Kuwait for Passover on numerous occasions, and spent 2 Chanukkah seasons traveling in Afghanistan.  Night after night Soldiers came together to light candles, sing, share stories, and build community.  One Sergeant came every night and stayed until midnight.  His Soldiers complained, “Why do you have to go there every night?  What do you do?”  He replied, “We sing, we laugh, we tell stories.”  “Well,” they questioned him, “You can’t do that here with us?”  “Yeah,” he concluded, “but there they get my jokes!”  He later confided, “I didn’t realize how I was longing to connect to my people.”

Being a Jew in the military can be so isolating.  As a Jewish chaplain, I bring folks together who often thought that they were the only Jewish person within hundreds of miles.  And I hope that the connection we establish will endure long after I have left that location.

Judaism is not a pacifist tradition.  We believe in the right- the obligation- of self-defense.  The Torah itself recognized the need for chaplain support in the military.  “Before you join battle, the priest shall come forward and address the troops.”  (Deuteronomy 20:2)  It is taken for granted that the troops have spiritual needs that require the unique perspective of religious leaders.  My 37 year career playing that role for our Soldiers today has, indeed, been a humbling honor and privilege.

Rabbi Bonnie Koppell is a Chaplain (Colonel) in the United States Army Reserve and currently serves as Command Chaplain of the 807th Medical Command (Deployment Support) in Salt Lake City, Utah.  She is also the Associate Rabbi at Temple Chai in Phoenix, AZ.